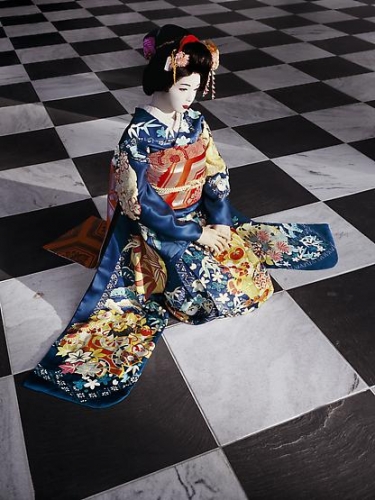 The Baldwin Gallery is pleased to present its fourth show with the acclaimed photographer Laurie Simmons. Since the 1970s, Simmons has staged and photographed scenes using dolls, dollhouses and other toy objects to create self-contained worlds that function as psychological spaces and blur the boundaries between the real, the unreal, and the surreal. These intricate alternate-realities, though staged with toys and inanimate objects, reflect our real human emotions, dreams, and fears and enable the viewer to ponder the human psyche more objectively. In her latest series, The Love Doll, Simmons photographed an anatomically correct "Real Love Doll" from Japan in a human-scale home. Each photograph in the series depicts the chronological progression of the artist's relationship with the Doll and its increasing familiarity - the earlier photos show the lifelike latex doll in formal poses while the most recent represent the subject engaging in seemingly personal thoughts and actions. The emotional intimacy of the images affords the subject a dignity that divorces her from her material function: the presence of an inner life creates a sense of personhood which contrasts with the innate objectification of Love Dolls as well as human sex workers. Simmons dignifies The Love Doll by dressing her in the clothing of the traditional Japanese courtesan. The increasingly personal nature of the images not only engages the desires, fantasies, and emotions of the audience but also humanizes the inanimate subject and gives her an agency that is far from intrinsic.

Laurie Simmons received a BFA from the Tyler School of Art at Temple University in Philadelphia in 1971. Her prolific and distinguished career has led to many awards, including the National Endowment for the Arts Grant in 1984 and the Roy Lichtenstein Residency in Visual Arts from the American Academy in Rome in 2005. In addition, her work has been shown throughout the world in prestigious venues including the Museum of Modern Art and the Whitney Museum of American Art in New York, the Museum of Contemporary Art in Chicago, and the Tate Modern in London. Her work has also appeared in the Wiener Internationale Biennale (1981), Whitney Biennial (1985 and 1991), Bienal de São Paulo (1985), and Austrian Triennial on Photography in Graz (1996). She currently lives in New York City.