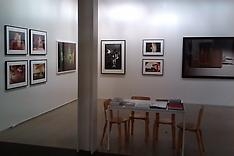 Wilkinson Gallery (London) project will illustrate the dialogue between Jimmy DeSana and Laurie Simmons between 1973 and 1990. The two artists met in New York on the A train in the fall of 1973 and immediately recognised their shared interests in photography. While DeSana ventured out with his camera, shooting commercial jobs for the Soho Weekly News by day and stalking East Village hangouts at night - Simmons, by contrast, started a studio practice cantered on the notion of tabletop photography, setting up small objects, toys and figures in a desire to obscure scale, reality and reveal the camera’s propensity to lie rather than tell truths. DeSana and Simmons set up twin darkrooms, and traded information – both technical and conceptual. Simmons has often acknowledged that DeSana taught her most of what she knows about photography, acting as a friend, advisor and mentor until his death in 1990.